Crescent Manufacturing will celebrate our 50th Anniversary in August 2010. With the start of our new fiscal year, the celebration has been kicked off with a full article in The Distributor's Link magazine, about our history.

Written by Kimberly Guerrette, Crescent's Vice President Sales, and daughter to one of the original owners, it is a fun look at how Crescent began, changed, and has grown over the years. Crescent continues to prove that the "American Dream" is still alive and kicking from our beginning and still is today.

On August 26th, 2010, Crescent Manufacturing will reach a milestone for any company, our 50th Anniversary. As the sole employee that has known the company for all those years, I would like to tell our story to commemorate the occasion.

The year was 1960; I was five, when Merwin Ellert (my dad), Henry Sneiderman, and Herman Keller purchased Crescent from Mrs. Mildred Tuttle upon her husband's death. Mr. Tuttle operated Crescent from a small two-car garage behind his home on Crescent Reservoir, In Southington, CT. The real estate broker, dry cleaner, and auto mechanic had been lifelong friends and decided this was their opportunity for the "American Dream". Merwin was the salesman, while Henry and Herman would somehow figure out how to make the screws. Mr. Tuttle was little more than a one-man show. They found the name of a company called ALLMETAL Screw Products. Merwin made his first sales call on Moris Epstein who promised him "when you make your screws, I'll give you an order." That's how it all began.

In 1967 with three new employees, four headers, three slotters, and five thread rollers, Crescent moved from its present location in Burlington, Connecticut. The entire manufacturing area didn't even take up one-third of the then 15,000 sq. ft. building, but they planned for room to grow. One of those three employees was Norman Provencher, now Crescent's Quality Manager and our senior employee with 42 years of service. Norm was making great money back then $3.00/hr running ten machines. After a couple of years, he asked if he might have a raise and was told "we can give you another nickel, but you'll to run more machines." Ah the good old days!

In July 1980, it was announced that crescent had been sold to Mr. Richard Gates (Dick), owner of the Smith-Gates/Adirondack Wire & Cable Co. located in Farmington, Connecticut, and the three original partners were retiring. The rest of us all remained in Burlington.

Mr. Richard Hrinak came to Crescent that August. Our favorite story about Dick is his very first day. A faucet had been left on in the wash department, a drain clogged, flooded the floor by Monday morning. dick walked in the shop at 6 a.m., saw the water, asked who worked over there. When asked to grab some mops, they informed him that wasn't their job. He asked where the time clock was, they pointed, and said: "go punch it - you're out of here." He hadn't even been here five minutes. But we all quickly learned his bark was worse than his bite. 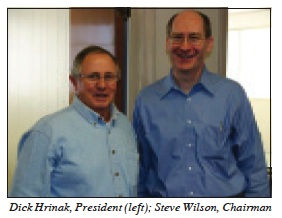 It didn't take long for Dick to "grab them by the horns", as he always says, and get Crescent heading in a whole new direction. He began by expanding our line. We went from #00s through #5s to adding #6s through 5/16 parts. We went from an almost total commercial base to military and aerospace parts. More materials were added to cover our ever-increasing capabilities. Shank slotted, drilled, and captive parts joined the list that continues to grow, even today almost 30 years later. This past year, we purchased more heading equipment to manufacture parts up to 3" long. Back in the 60s, we had a 1" capability. That 15,00 sq. ft. facility is now over 19,000 and space is getting tight. Crescent presently has over 85 pieces of manufacturing equipment, with separate shipping and maintenance departments, and employs over 35 people.

There have been those bumps in the road over the years, like today's economy, but with the diversity that Dick brought to Crescent and our quality reputation growing throughout the industry, we manage to keep a steady course. We began doing trade shows and advertising in Distributor's Link. The word has been getting around this company that we manufactured miniature screws. I remember exhibiting at the very first National Industrial Fastener Show in Columbus, Ohio. Crescent was there much to the dismay of some of our customers. I recall being told, "What are you doing here? You're my secret weapon!! We don't want our competitors finding out about you!!". But find out about us they did. Our customer base swelled from a couple hundred to over 900. From finding the name of one distributor in a pile of old paperwork to customers all over the world.

In 1984 Mr. gates sold his other holdings and kept Crescent along with Dick, President and

Mr. Richard Green, CFO, as stockholders. 2005 brought the most recent change to Crescent. Mr. Steve Wilson, now Chairman, found Crescent to be that small company he was looking to buy, right when they were looking to sell. Steve saw the potential that Crescent has with our ever-evolving plan. Dick and Rick continue with Crescent, along with all the people you have come to know. We have many long-term employees, most with over ten years of service and experience. Our sales department consisting of Marion Lederman (30 years), Ginger Doherty (11 years), and Aaron Stevenson (3 years). Their knowledge of our product and manufacturing capabilities are at your disposal. Bruce Penn (30 years), VP of Manufacturing, works with Aron to get your orders out on time - at least most of the time.

Well, I hope you have enjoyed this small glimpse of Crescent Manufacturing, a company I have known all my life and have worked for the last 31 years. We hope you will continue to think of Crescent for all your fastener requirements sizes 00 through 5/16s. Remember, we cover lengths from 1/16 to 3". We still provide commercial parts as well as our extensive line of military and aerospace products. Crescent's reputation for quality is backed by our continuing commitment to maintain our QSLM CL2A & CL3A, ISO 9001/2000, and under construction, our AS9100 certification. We support our customers' needs by offering parts that are DFARS, ROHS, & REACH compliant. NADCAP compliance is available upon request.

In 2007 we became ITAR registered. Throughout these almost 50 years, we have continued to maintain our 1,000 piece minimum and have tried to stock the most demanded parts for a quicker delivery. Please visit our website at www.crescentmanufacturing.com for all our latest capability information. We update our stock availability weekly and our military parts list keeps growing. It has been a pleasure to serve all of you this last half-century. Crescent strives to continue our present relationships and hops to get to enjoy the excitement of many new ones as we grow into the future.