BURLINGTON – Crescent Manufacturing in Burlington is looking to expand its business.

Construction on the project “may start in spring, most likely in spring,” said company owner Steve Wilson. The company is in the process of getting estimates for the work and seeking town approvals.

The plan is to remove a1,000-square-foot garage on the property and replace it with an addition that will be primarily used to store wire.

“Basically, we have an offsite warehouse that we use up by Bradley Airport for our wire that we’d like to bring into Burlington because it would decrease costs and help with our logistics,” Wilson said. “So, we do need the space and that’s the key driver for us behind the expansion. Wire is our major raw material and we use the wire to make a variety of metal fasteners.”

The fasteners the company makes are used in aerospace, military, industrial and commercial markets, he said. According to international sales manager Ginger Doherty, their fasteners are in many of the products people use on a daily basis.

“We are a major supplier to the aerospace industry primarily, about 95 percent of our business, and we make screws, so basically every airplane that’s in the air has my product in it,” she said. “Lots of cars, every computer, every cell phone.”

The company was founded in1960 by three men with no background in the industry, according to Kimberly Ellert Guerrette. Her father, Merwin Ellert, who was areal estate broker at the time, purchased the company from Mildred Tuttle with two partners, one a dry cleaner and the other an auto mechanic.

Tuttle sold the small one man operation after her husband’s death. He had run the operation out of a garage on Crescent Lake in Southington.

Ellert made the first sales call for the new company and was told that when they made their screws, the customer would place an order,Guerrette wrote in an article for the company’s 50th anniversary in 2010.

For the first seven years, the company remained in the small garage and Guerrette remembers spending time there as a child.

“I used to go to work on a Saturday and they’d amuse me, I’d go fishing,” she said. “Then [my dad would] sit me down to sort screws.” Ironically, the plan was that none of the founders’ family members would work for the company.

But after college, she was filling in for someone who was away. At the same time, the business was sold. The new owners kept her on and she has been there ever since.

In 2005, Wilson purchased the company from a group of shareholders.He thinks it was meant to be because of an unlikely connection he had with Dick Gates, who was the principal shareholder when he bought the business.

“Dick Gates’ grandfather was Frederick Taylor Gates. He was born 99 years before me in the same town in upstate New York, so this is like providential,” Wilson said. “[Frederick Taylor Gates] was the person that John D. Rockfeller Sr. relied on. He was his closest and most trusted aid.” 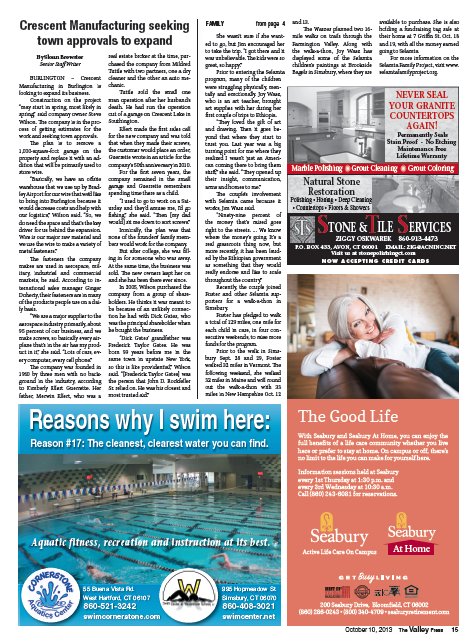