With the publication of the second edition of Mechanical Fastening, Joining and Assembly by Taylor & Francis, Mike McGuire asked me a very good question recently -- why? It is a question I had asked Mike many years ago, when he mentioned he was starting a fastener magazine, and would I write an article for it. I have always been an avid reader. Writing followed all of that reading. But to answer the question directly. I look to fastener manufacturing.

Whenever I wanted to learn about tool steels, metal forming or thread forming screw threads, 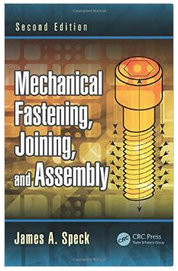 there was usually a book to be found that increased my knowledge I could learn on my own. Technical books have always been a great resource, whenever I had an application engineering problem to solve. After eight formative years in the business, I accepted an application engineering position with Crescent Manufacturing in Burlington, CT. Established in 1960, it had been owned by three partners, who for twenty years poured heart and soul into Crescent to grow the company. Having sold the business and retired, it was under new leadership of Dick Hrinak, with a knowledgeable and skilled sales and manufacturing team. Those were a technically charged and exhilarating times.

I wrote the first edition of Mechanical Fastening during those years. Mike's magazine, American Fastener Journal had taken off. Led by Dick, Crescent had too. Articles I wrote for AFJ were often driven by projects in the works.

Writing is a solitary pursuit, with an interesting lag effect. An article written for the magazine might not appear in print for months, long after the driving force had shifted. Articles were a page or two, and writing them was like talking shop. That first edition of Mechanical Fastening amplified the lag effect. However, even with the Fastener Fundamentals materials I taught in workshops included, some of the material's soul was lost. After publication, I started work on the second edition. Many of the notes and ideas for it were written and then filed away as time and life had other plans.

Contemplating the future a few years ago, I saw this second edition as a job not yet complete. I wanted to give back something for all those authors whose books on tool steels, heat treating , corrosion, and hundreds of other fastener related topics I had found so helpful. I started writing this edition -- with focus. I've written as well as I know how. I hope it reads as if you and I were talking. My wish is to provide a book on fastening that is reader-friendly, and include information to help grow knowledge and skills in handling and solving problems.

Preparing to leave full time employment, I started driving one evening with no idea where to go. Without thinking, I found myself driving up to Burlington and crescent Manufacturing. The new owner, Mr. Steve Wilson is a wonderful steward of the business. A new building was topped out and being finished. On a subsequent visit for this article, I learned that their range is now from #000 - 3/8", with lengths to 3 inches. I want to thank Kim Guerette, whose Dad was one of the original owners, and Steve Wilson for their input on this article. I've been blessed with the friendship of great people and known the satisfaction of good work. It is hoped that this second edition reflects this, provides useful fastener information for a new generation, and honors all who work hard to build good businesses.

The article "About a Book" was written by Mr. Jim Speck for the "American Fastener Journal". Jim Speck was the Vice President of engineering and Marketing for Crescent Manufacturing's twenty years. Jim is currently completing the second edition of "Mechanical Fastening, Joining and Assembly" by Taylor and Francis.