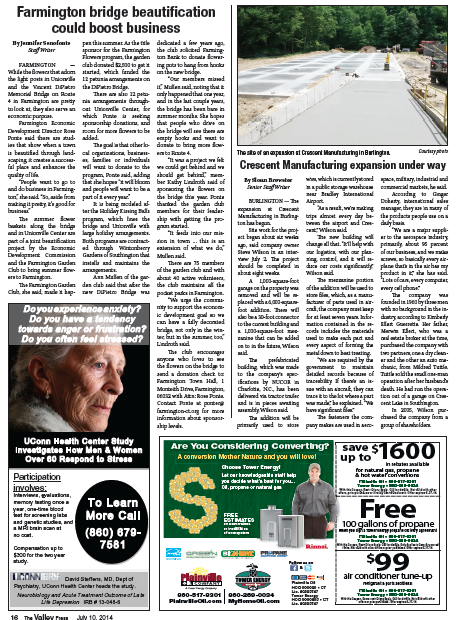 BURLINGTON, CT --- The expansion at Crescent Manufacturing in Burlington has begun.

"Site work for the project began about six weeks ago", said company owner Steve Wilson in an interview July 2. The project should be complete in about eight weeks.

"The prefabricated building, which was made to the company's specifications by NUCOR in Charlotte, N.C., has been delivered via tractor trailer and is in pieces awaiting assembly", Wilson said.

The addition will be primarily be used to store wire, which is currently stored in a public storage warehouse near Bradley International Airport.

"As a result, we're, making trips almost everyday between the airport and Crescent" Wilson said.

The new building will change all that. "It'll help with our logistics, with our planning, control, and it will reduce our costs significantly", Wilson said.

The mezzanine portion of the addition will be used to store files, which, as a manufacturer of parts used in aircraft, the company must keep for at least seven years. Information contained in the records includes the materials used to make each part and every aspect of forming the metal to heat treating.

"We are required by the government to maintain detailed records because of trace ability. If there's an issue with an aircraft, they can trace it to the lot where a part was made", he explained. "We have significant files."

"The fasteners the company makes are used in aerospace, military, industrial and commercial markets", he said.

According to Ginger Doherty, international Sales Manager, there are in many of the products people use on a daily basis.

"We are a major supplier to the aerospace industry, primarily, about 95 percent of our business, and we make screws, so basically every airplane that's in the air has my product in it", she has said. "Lots of cars, every computer, every cell phone."

The company was founded in 1960 by three men with no background in the industry, according to Kimberly Ellert Guerrette. Her father, Merwin Ellert, who was areal estate broker at the time, purchased the company with two partners, one a dry cleaner and the other auto mechanic, from Mildred Tuttle. Tuttle sold the small one-man operation after her husband's death. He had run the operation out of a garage on Crescent Lake in Southington.

In 2005, Wilson purchased the company from a group of shareholders.